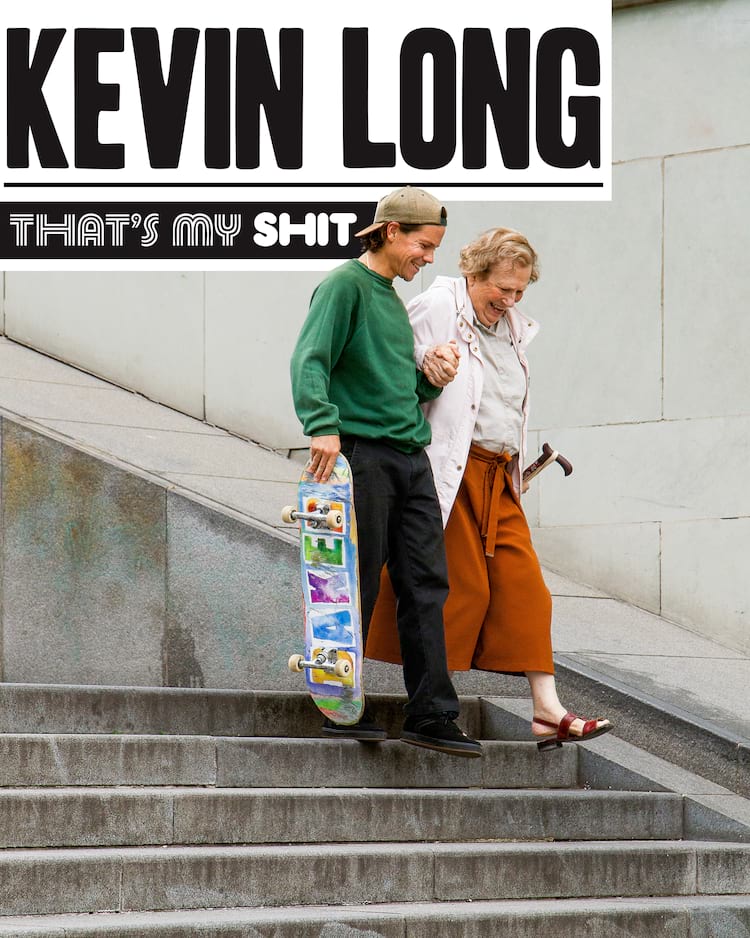 It ain't all wallies and Etch A Sketchs, Spanky's a rad dad with enough hobbies to last two lifetimes. Read his breakdown from Bondo to the Land Before Time in this piece from our January '23 mag. You'll also learn about that lucky shirt. 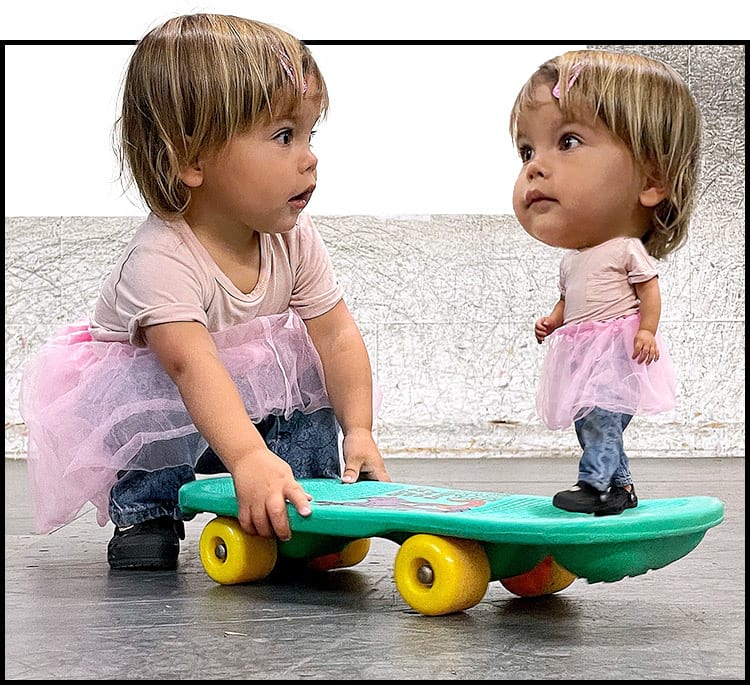 MY KID
Lou is the best thing that’s ever happened to me. She’s two and a half now. She just came out cool, smart, hilarious and perfect straight out of the gate. Shout out to my wife Kaysie for cooking her up just right. I can’t wait to see what kind of special shit she does with her life. 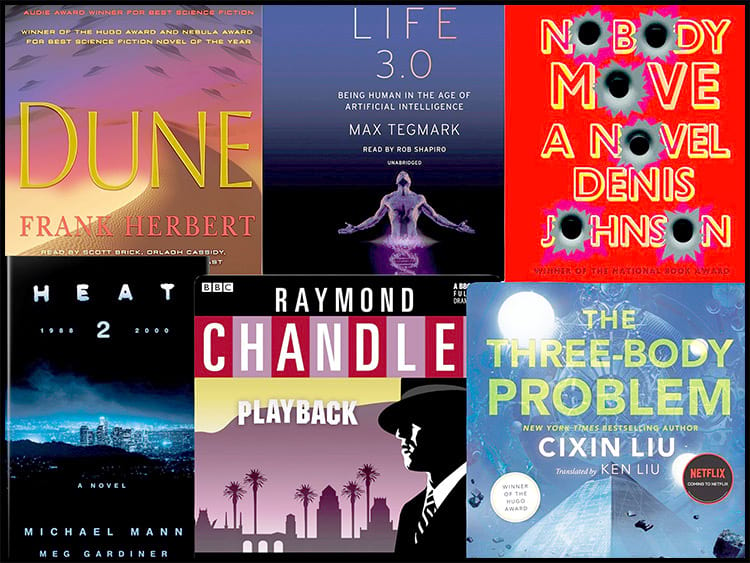 AUDIO BOOKS
I wish I read more often these days. You know—like regular books with paper and shit. The truth is that these days with skating, my family and my day job at Baker, I very rarely have any me time with my hands free. Too bad there aren’t more hours in the day. With audio books I can draw, comb the streets for spots or walk my dogs and still fill my head with nerdy crap so my dumb ass can occasionally feign sophistication. I like anything from pulpy detective novels to the classics that I missed by dropping out of school to skate. Mostly I like fiction but I recently listened to a book called Life 3.0 about AI that scared the shit out of me. It was fascinating but I can’t really recommend it. 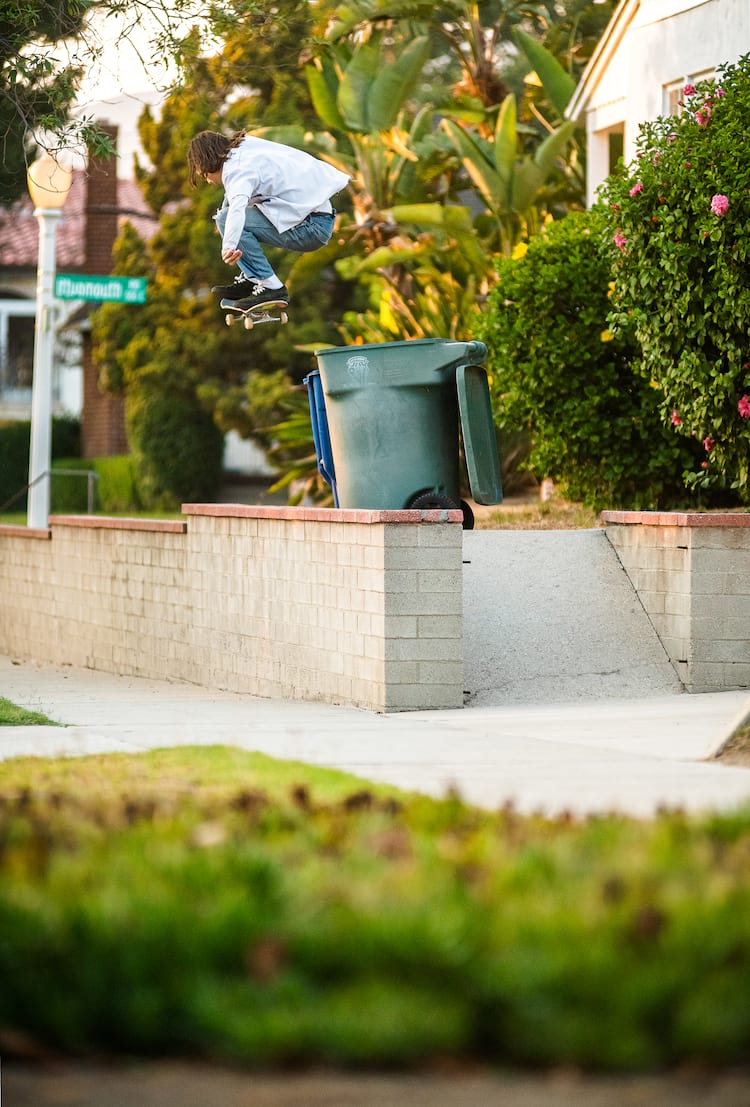 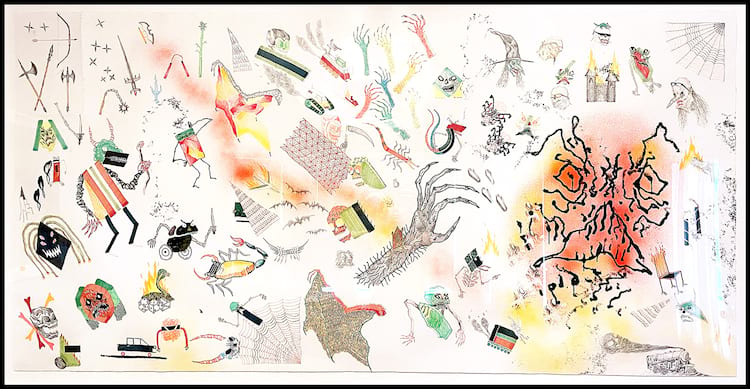 BIG NECKFACE DRAWING
We got this big-ass framed NECKFACE drawing above our living-room couch. It’s a sick, loose, doodly colorful one with a bunch of shit going on. It really ties the room together. Andrew commissioned him to do it a while back but when he moved houses he didn’t have a wall that it fit on. I let him “borrow” a slightly-less-gigantic drawing that I did and we get to hang this one in our house. I came up hard on that trade. 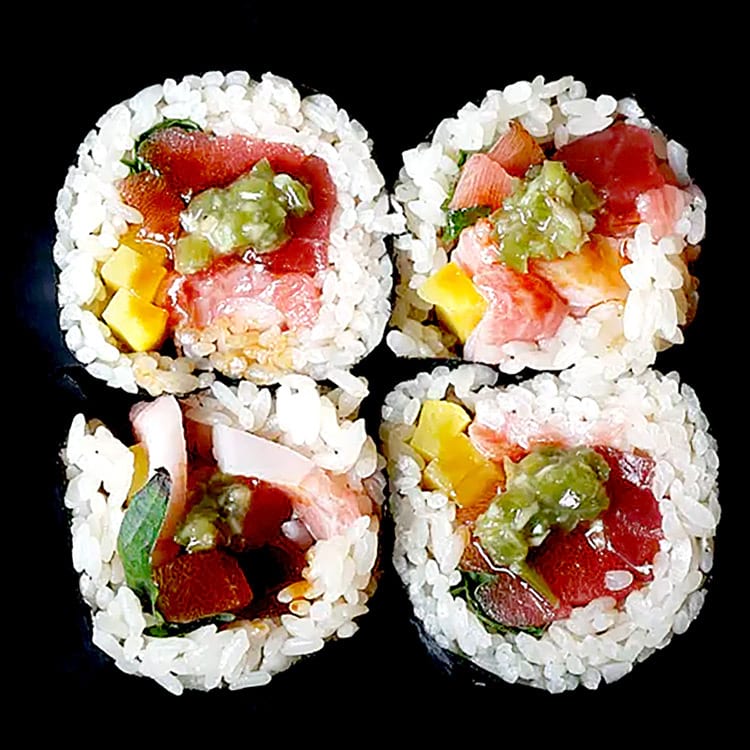 SUSHI
Forever my favorite food and definitely my celebration meal of choice. Besides seafood,
I haven’t eaten any animals for 20 years. But fuck—I eat a lot of fishies. 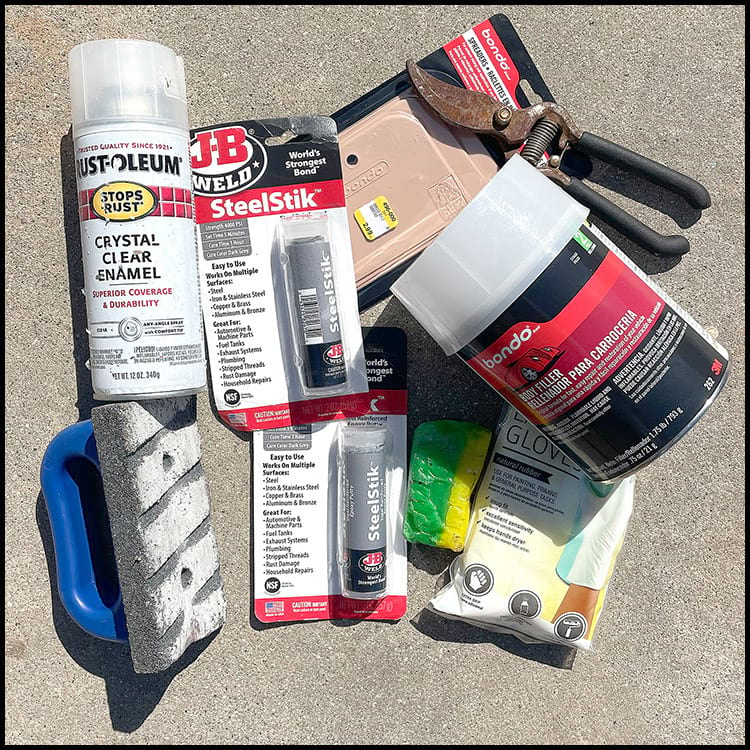 STEELSTICK, RUB BRICK, BONDO
It took me way too long to realize that it’s more rewarding to find your own new spot and put in the work to set it off, especially in LA where every spot gets devoured the second it shows up on the Internet. Skating with Tom K has taught me to be more proactive with making previously unskated stuff skateable. You gotta have your tool kit in the car—always. I’m still not even close to his level, but luckily he’s often right there, offering to rip a rail out of the ground and throw it in a cave if anyone needs it. 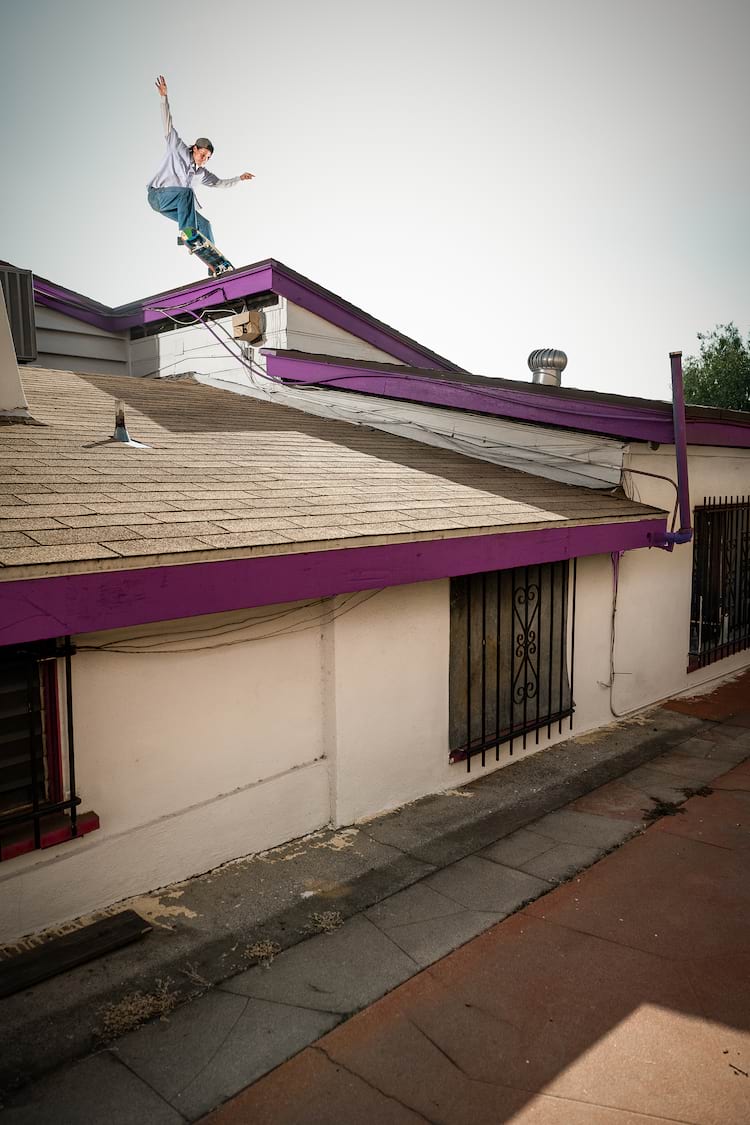 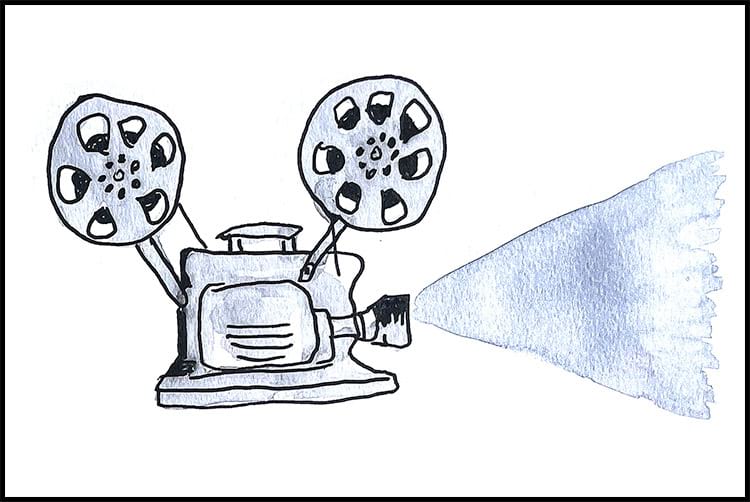 THE MOVIE THEATER
That’s my happy place. I’ll see anything. Okay, Marvel movies make me fall asleep, but I’ll still go. Sometimes I fantasize about what it would’ve been like to go to film school. Instead, I just spend too much time listening to podcasts with middle-aged nerds dissecting classic films, but I’d much rather just be watching them. It’s sick—in LA there are a handful of theaters that play old movies so you can catch great selections of old films that probably influenced your favorite contemporary movies. There’s just so much great shit out there and I find it endlessly fascinating. 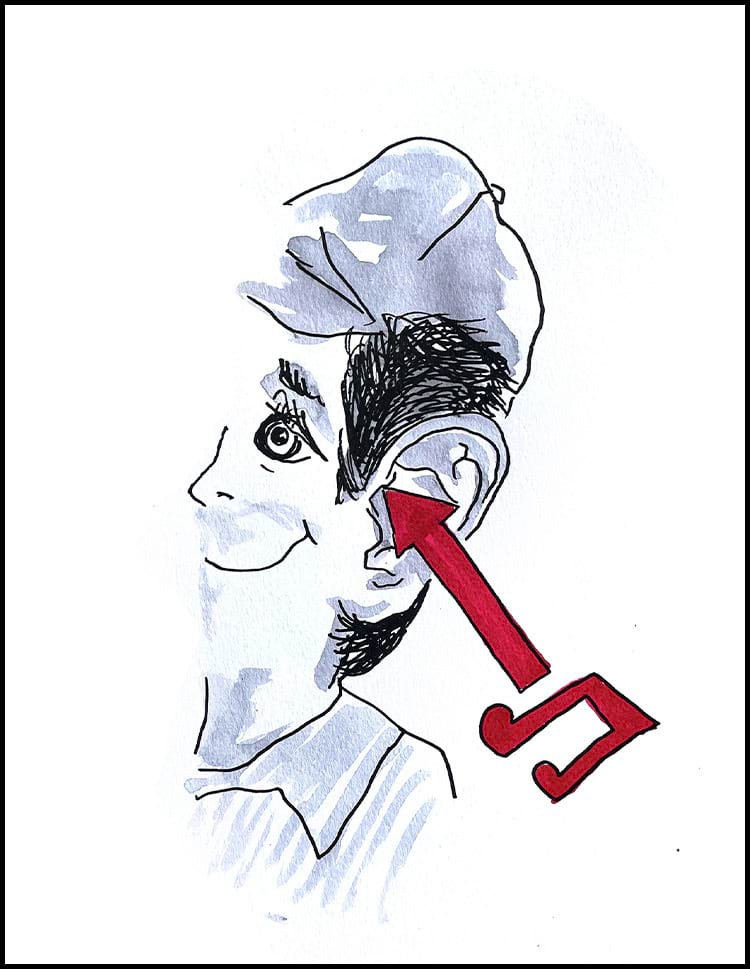 STREAMING MUSIC
Look, I prefer records and I even have a big cassette collection that I truly love, but there’s something about having instant access to an endless catalog that makes me feel like I’m living in the future. These algorithms might eventually lead humanity to some dystopian tech-fueled hellscape, but at the moment they are improving my commute with a nice obscure soundtrack. 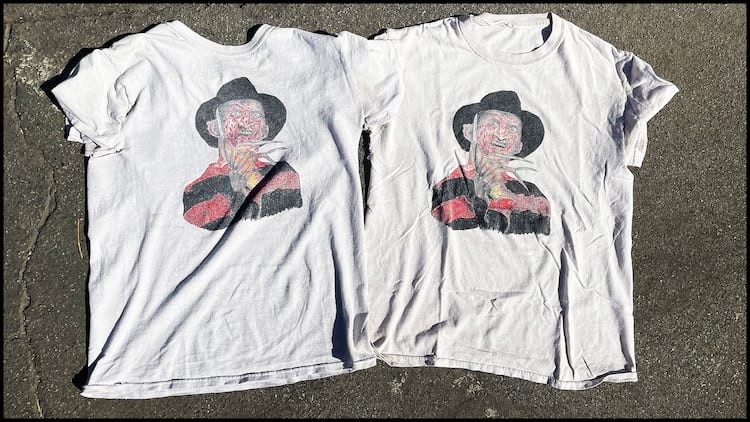 FREDDY KRUEGER SHIRT
It’s a Lottie’s shirt that Mike Gigliotti drew. He’s the color-pencil king. The original Nightmare on Elm Street is still one of my favorite movies and this shirt is lucky. I actually have two that are exactly the same, but they’re both old and on their last leg so I only wear them when I need special powers. 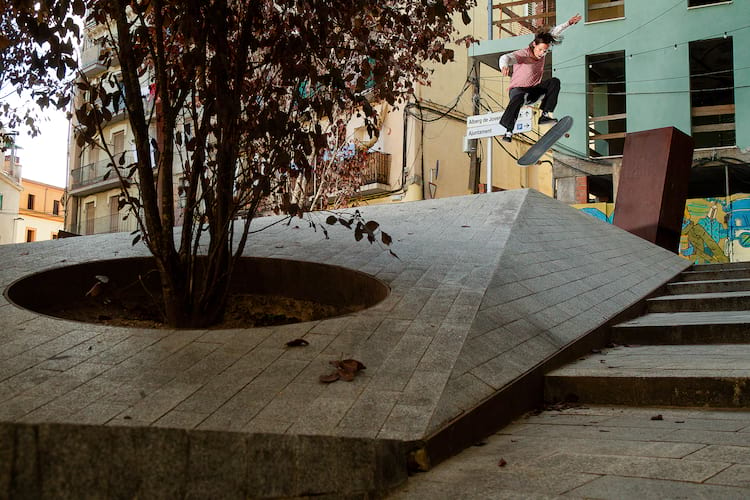 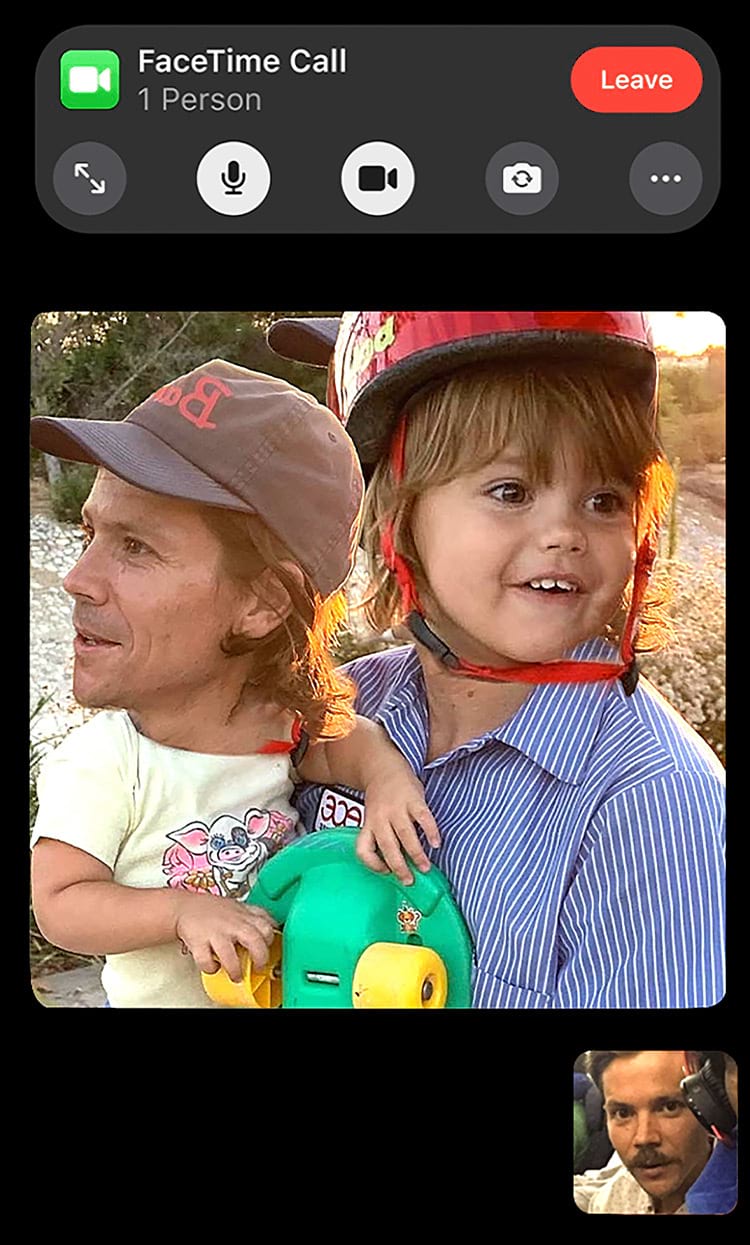 FACETIME
This is a lifesaver on trips. Technology is crazy. I get to check in with my girls face to face every day on the road. I don’t know how I’d be able to leave without that. 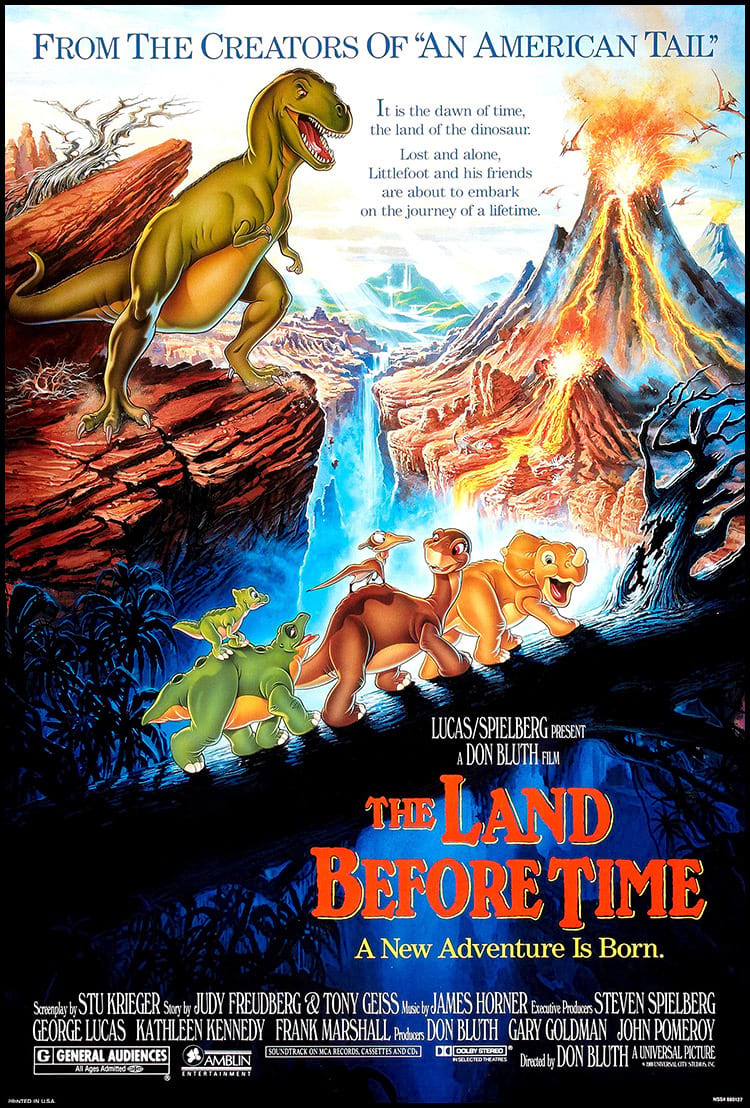 THE LAND BEFORE TIME
My daughter wants to watch this movie every single morning; she’s obsessed with dinosaurs at the moment. I’m super down because it’s one of the most beautifully animated movies from my childhood. If you’ve seen it I know what you’re thinking—yes, of course I fast forward the scary, sad part. It’s brutal. Neither of us want to watch that. 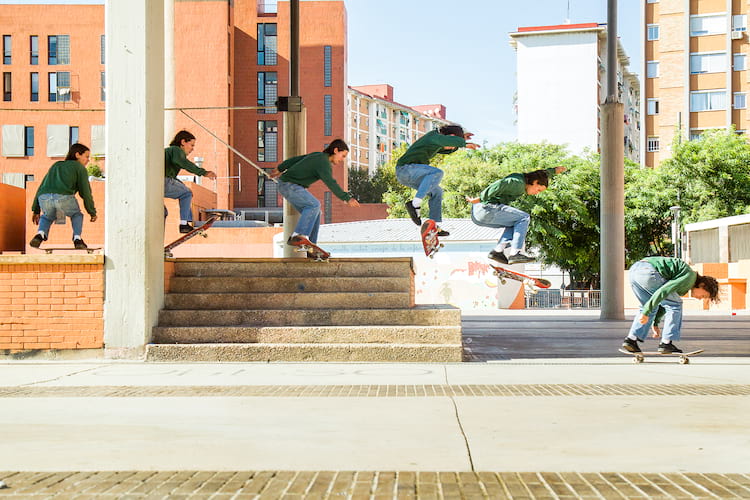 You think this is slicked back? This tailslide kickflip is pushed back!     photo: Karpinski 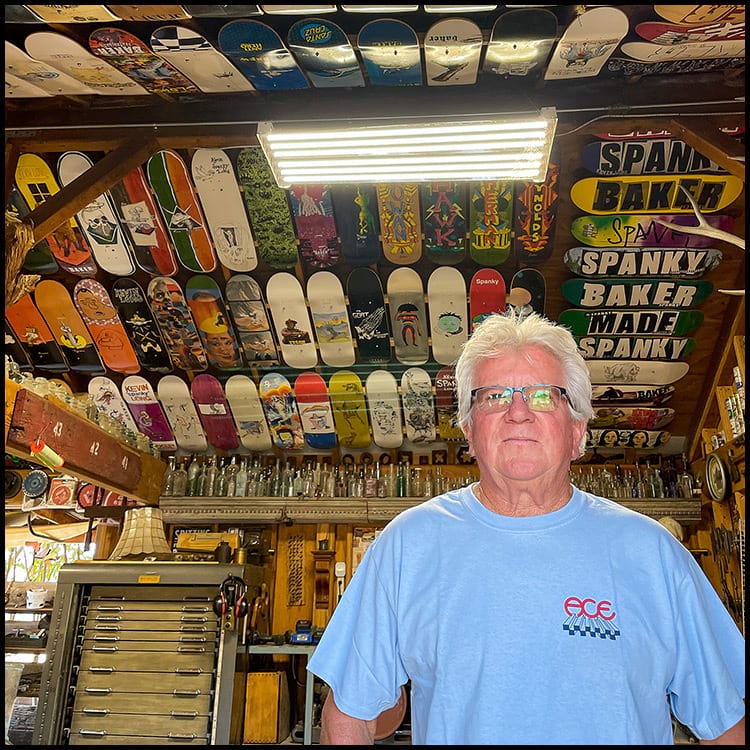 DAD’S BOARD WALL
Technically this is my dad’s shit—somehow he has collected and saved all of my pro boards and all of the boards I’ve done artwork for over the years. They’re all hanging up in his woodshop at his ranch in the Central Coast of California where he lives. He just informed me that he has 160 boards in total. I feel super lucky that he has this crap. It’s pretty sick to look at them all together. I would’ve managed to hold onto two or three boards tops without him. Maybe Lou will get a kick out of them when she’s older. 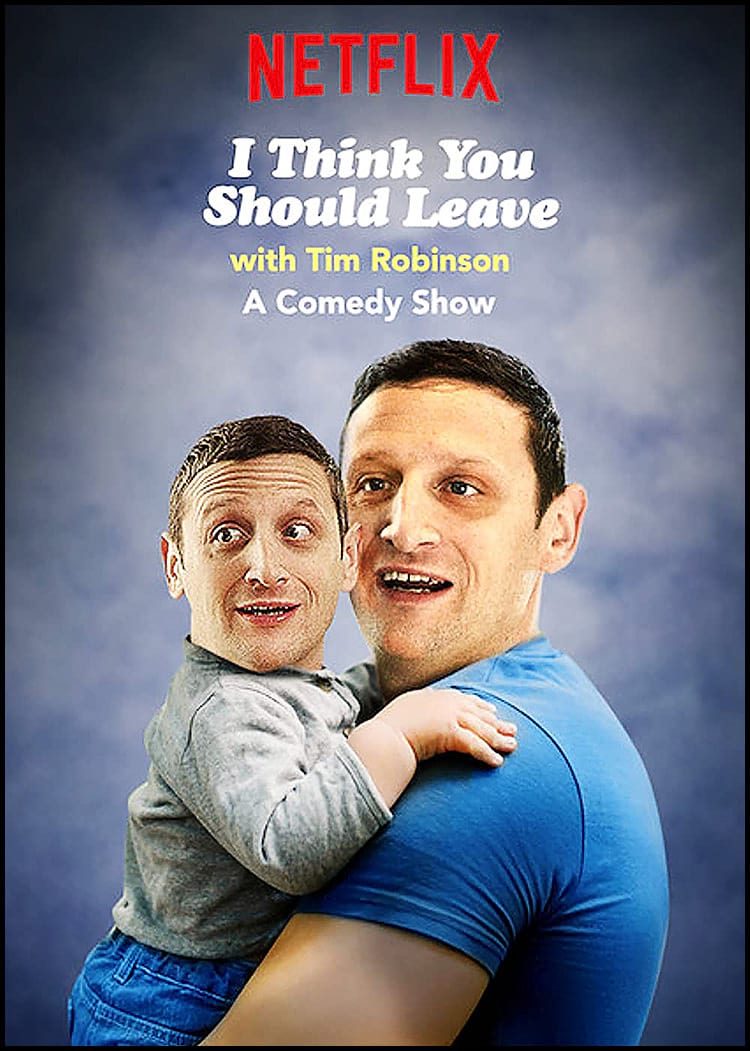 I THINK YOU SHOULD LEAVE
This is my favorite show of all time. It’s a sketch-comedy show on Netflix from Tim Robinson who, in my opinion, is the funniest person alive. I found out about/fell in love with this show a few years ago. Later, I met Tim through mutual friends and we started skating together a bunch. I’m proud to call him a good pal—and he rips. I don’t even want to describe the show. Just do yourself a favor and watch it. Give it a few episodes to sink in. Tim just received an Emmy for season two and he also has a mean frontside flip. 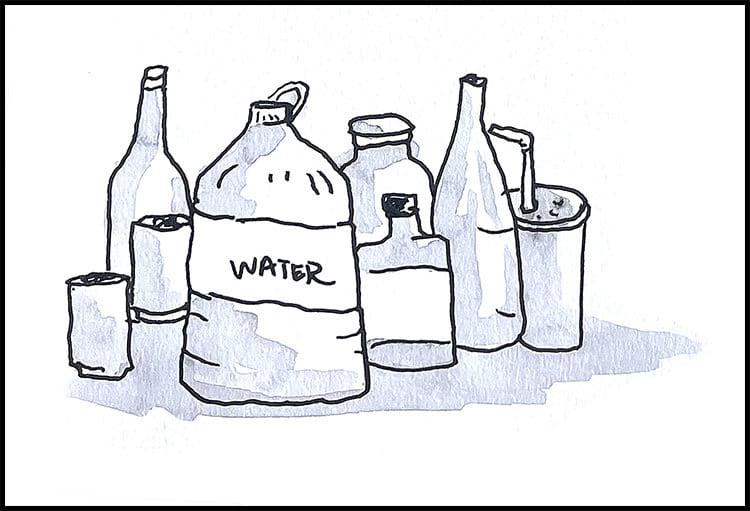 BEVERAGES/WATER
I drink so much—mostly water. Gallons of the stuff. When I go to 7-Eleven or Whole Foods I’m leaving with five-to-ten different kinds of beverages including a gallon of water. I’ve been sober for nine years and sometimes I can’t help but wonder if part of my drinking problem was that I was just so damn thirsty. 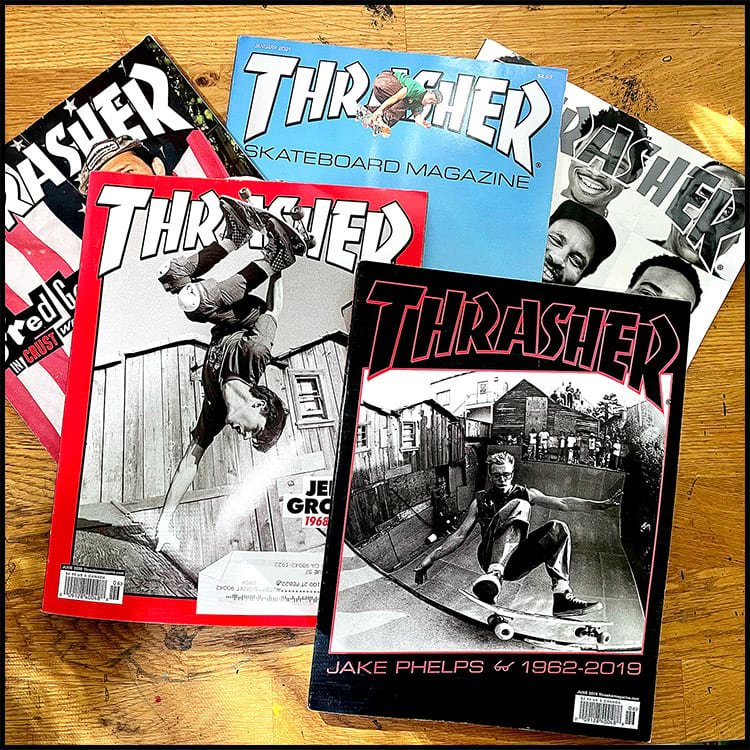 SKATE MAGS
At the risk of sounding like a teacher’s pet here, I fucking love getting Thrasher in my mailbox and holding it in my hands. I LOVE skate photos and nothing will ever replace them. I’ve always got some of my recent favorite issues in my office and some special ones from when I was a kid deep in storage. 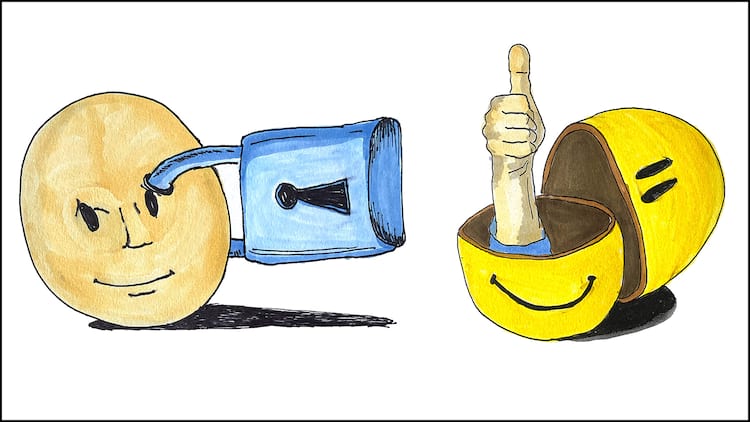 MENTAL HEALTH
Okay, first of all I’m not a life coach—I am bat shit crazy. Aren’t most of us? I’ve been feeling great for a long time, though. I have had my share of ups and downs in life so far. Like many others out there, I’ve battled depression, anxiety, major loss, trauma and addiction. I’ve been fortunate enough to make changes in my lifestyle that have stuck for almost a decade. Dropping the drugs and alcohol was a necessary first step for me personally. It’s hard to say what works because each person’s journey is unique. The main thing I’ve come to realize is that you’ve just got to put in the work. Look, if you find that you are struggling, there are so many things you can try—you can eat healthier; maybe that corny-ass meditation app can unlock something in you; talk to a therapist—it’s not as scary as it sounds; take a daily walk; join a 12-step program or just reach out to a friend. Shit, reach out to me. Life is fucking short, but sometimes one thing leads to another and eventually you’ve pulled yourself up out of a rut and have a whole new perspective on life. I just gotta say it because I feel lucky to have found some happiness and most of us know at least one person who never got the chance to find that. If you happen to be struggling, just know that you are not alone. 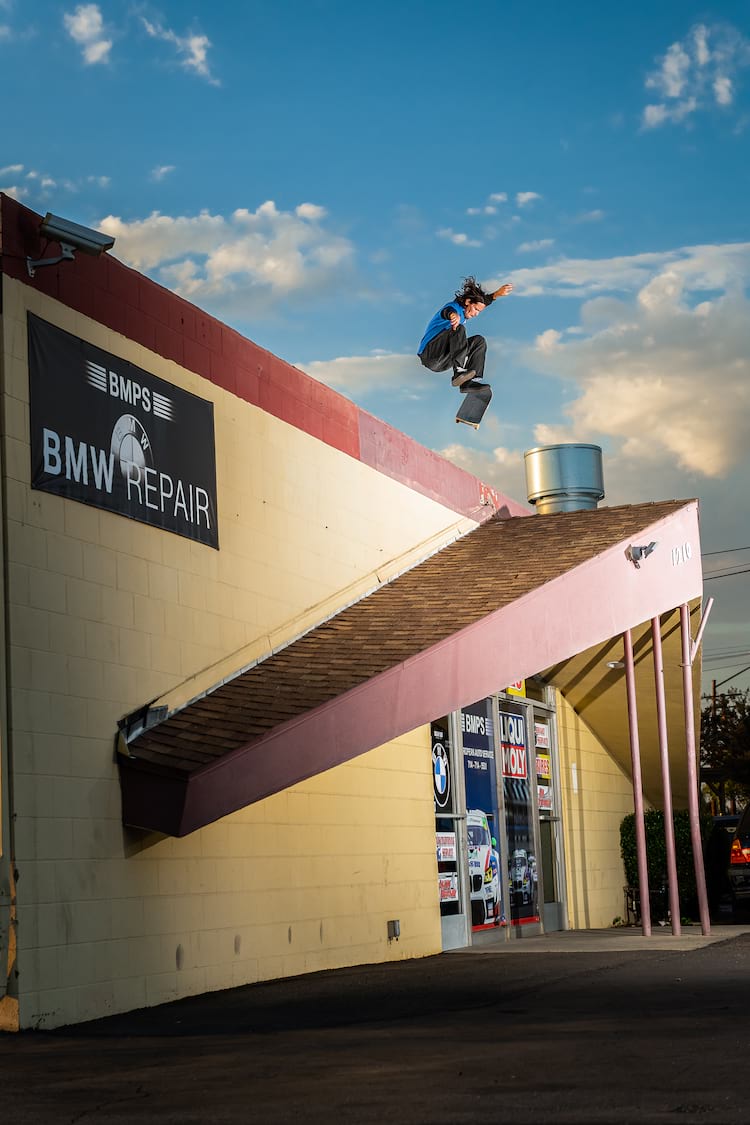